Uritractin: Protection and care of your urinary tract

Uritractin is a 100% natural food supplement that combines the antibacterial and antifungal properties of proanthocyanidins from the concentrated extract of cranberries and anthocyanidins naturally present in the extract of hibiscus, to prevent urinary tract infections (UTIs).

Uritractin’s cranberry extract is obtained from the Vaccinium macrocarpon Aiton species, belonging to the genus Vaccinium L. and family Ericaceae. This fruit stands out for its large amount of antioxidant polyphenols, such as proanthocyanidins (also known by the abbreviation PAC), known for their preventive capacity against urinary tract infections (UTIs) (1).

The cranberry proanthocyanidins are type A, the form that has the ability to inhibit the adhesion of bacteria to the epithelial cells of the urinary tract [2]. Type B proanthocyanidins are more easily found in nature (green tea, grapes or chocolate, etc),  however, they lack this antibacterial capacity [3].

Urinary tract infections (UTIs) are quite common, especially in women, due to female anatomy and hormonal problems. In most cases, they are caused by the ascending colonization of organisms of enteric origin, mainly Escherichia coli (E. coli) that habitually colonize the vaginal opening and the periurethral area to ascend to the urinary bladder and, eventually, to the kidney, causing asymptomatic bacteriuria, cystitis, or pyelonephritis. Clinical evidence shows that the consumption of cranberries can decrease the recurrence of urinary infections caused by E. coli [4–10], due to the ability of their proanthocyanidins to inhibit the adhesion of these bacteria to the superficial mucous membranes of the urinary tract organs [11].

The main responsible for the adhesion of E. coli to the mucous membranes of the urinary tract are filamentous appendages called fimbriae or pili, present on the surface of the bacteria. The fimbriae are formed by polymeric filaments composed of protein subunits, where there are differentiated molecular structures called adhesins, which bind to specific receptors located in the epithelial cells of the urinary tract. Cranberry proanthocyanidins have the ability to bind to adhesins present in fimbriae and thus prevent their binding to epithelial cell receptors [11].

Uritractin’s cranberry extract is highly concentrated in proanthocyanidins type A. It is the result of a special process able to concentrate the total amount of natural polyphenols by 50 times, obtaining a final concentration of 50% by dry weight of fruit (determined by high-efficiency liquid chromatography, HPLC). One single capsule of Uritractin has 250 mg of a 50:1 extract of cranberries, which corresponds to the consumption of 125 mg of proanthocyanidins, 23.9 g of fresh fruit (the cranberry has on average 91% water in its composition) or 12.5 g of dehydrated fruit. 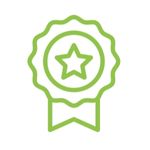 Another ingredient in the Uritractin’s formula is the concentrated extract of hibiscus flowers (Hibiscus sabdariffa L.). Hibiscus is a genus of flowering plants in the mallow family, Malvaceae. The genus is quite large, comprising several hundred species that are native to warm temperate, subtropical and tropical regions throughout the world. Some of these species, like the Hibiscus sabdariffa known from the popular hibiscus tea, are edible and highly sought after due to their diuretic and antimicrobial properties. Hibiscus flowers are rich in bioactive polyphenols, such as anthocyanins. The calyx is the most studied part of the flower, it has diuretic and antimicrobial effects, aids digestion, lowers blood pressure and combats oxidative stress [12].

The antibacterial properties of hibiscus extract were demonstrated in several scientific studies with different bacterial species such as Escherichia coli [13–16], Bacillus subtilis [14], Staphylococcus aureus [14], Acinetobacter bauma [17] and Klebsiella pneumoniae [16]. It is worth highlighting an interesting work published in 2008 by Anton Peleg’s group from Harvard Medical School, in which the antibacterial property of hibiscus extract was observed in an in vitro study against the bacterium Acinetobacter baumannii, well known for its high pathogenicity and resistance to antibiotics. Hibiscus extract achieved better results against the proliferation of this bacteria than some antibiotics such as gentamicin [17].

The best known and most popular work on the antimicrobial properties of hibiscus flowers was published in 2014 in the Asian Pacific Journal of Tropical Biomedicine, which analyzed for the first time the ability of hibiscus extract to inhibit the spread of the Candida albicans fungus, obtained from patients with recurrent vulvovaginal candidiasis [18]. From in vitro studies, researchers observed that the hibiscus extract inhibited the formation of biofilms produced by the fungus, an important factor in the proliferation of the infection. Biofilms are composed of cells produced by the fungus itself, arranged in a well-organized manner and strongly attached to each other and to the walls of the epithelial tissue of the urinary tract. In these biofilms, proteins and polysaccharides are produced that protect the fungus against the action of the immune system and against antifungal drugs, thus allowing the proliferation of the infection.

The diuretic property of hibiscus flower is another important characteristic to fight against urinary infections. Through urine, the urinary tract is cleansed, which allows the subsequent elimination of microbes [19].

The hibiscus flower extract of Uritractin results from a controlled extraction process able to increase its polyphenol content by 15 times, ensuring a minimum of 10% dry weight in active polyphenols (determined by high performance liquid chromatography, HPLC). One single capsule of Uritractin contains 55 mg of hibiscus flower extracts (15:1), of which 82.5 mg are active polyphenols (which includes anthocyanins). This would correspond to an equivalent intake of 825 mg of dried flowers.

It's time to say goodbye to UTI!